"ONE SACRIFICE" By Len Paxton

Posted by Angie Paxton at 6:36 AM No comments:

Here is just some thoughts and scriptures about healing.

Mal. 4:2 He will arise with healing in His wings.

Mat 8:16
When the even was come, they brought unto him many that were possessed with devils: and he cast out the spirits with [his] word, and healed all that were sick:

Mat 8:17
That it might be fulfilled which was spoken by Esaias the prophet, saying, Himself took our infirmities, and bare [our] sicknesses.

There are many, many more examples.

Exd 15:26
And said, If thou wilt diligently hearken to the voice of the LORD thy God, and wilt do that which is right in his sight, and wilt give ear to his commandments, and keep all his statutes, I will put none of these diseases upon thee, which I have brought upon the Egyptians: for I [am] the LORD that healeth thee.

His word is health to us:
Pro 4:20
My son, attend to my words; incline thine ear unto my sayings.
Pro 4:21
Let them not depart from thine eyes; keep them in the midst of thine heart.
Pro 4:22
For they [are] life unto those that find them, and health to all their flesh.

Why does it say in Is. 53:5 we are healed and in 1 Peter 2:24 We were healed.
In Is 53:5 it is a now healing. In the old testament they had to do sacrifices regularly. It could never put healing in the past or behind them. Because Jesus had not yet come. BUT...
After Jesus came now we can say:
We are healed. Past, it is done & always will be that way. Today can’t change what Jesus did. No more sacrifice for it. “IT IS FINISHED”. (We must receive it)

What He did, He will do again. Rom 2:11 For there is no respect of persons with God.


But what about after Jesus was off the earth?

Jam 5:13
Is any among you afflicted? let him pray. Is any merry? let him sing psalms.
Jam 5:14
Is any sick among you? let him call for the elders of the church; and let them pray over him, anointing him with oil in the name of the Lord:
Jam 5:15
and the prayer of faith shall save the sick, and the Lord shall raise him up; and if he have committed sins, they shall be forgiven him.


Act 3:1
Now Peter and John went up together into the temple at the hour of prayer, [being] the ninth [hour].
Act 3:2
And a certain man lame from his mother's womb was carried, whom they laid daily at the gate of the temple which is called Beautiful, to ask alms of them that entered into the temple;
Act 3:3
Who seeing Peter and John about to go into the temple asked an alms.
Act 3:4
And Peter, fastening his eyes upon him with John, said, Look on us.
Act 3:5
And he gave heed unto them, expecting to receive something of them.
Act 3:6
Then Peter said, Silver and gold have I none; but such as I have give I thee: In the name of Jesus Christ of Nazareth rise up and walk.
Act 3:7
And he took him by the right hand, and lifted [him] up: and immediately his feet and ankle bones received strength.
Act 3:8
And he leaping up stood, and walked, and entered with them into the temple, walking, and leaping, and praising God.

Act 5:15
Insomuch that they brought forth the sick into the streets, and laid [them] on beds and couches, that at the least the shadow of Peter passing by might overshadow some of them.
Act 5:16
There came also a multitude [out] of the cities round about unto Jerusalem, bringing sick folks, and them which were vexed with unclean spirits: and they were healed every one.

Act 8:7
For unclean spirits, crying with loud voice, came out of many that were possessed [with them]: and many taken with palsies, and that were lame, were healed.

Mat 10:1
And when he had called unto [him] his twelve disciples, he gave them power [against] unclean spirits, to cast them out, and to heal all manner of sickness and all manner of disease.

There are many other scriptures.

Posted by Angie Paxton at 6:24 AM No comments:

"A Day to remember" 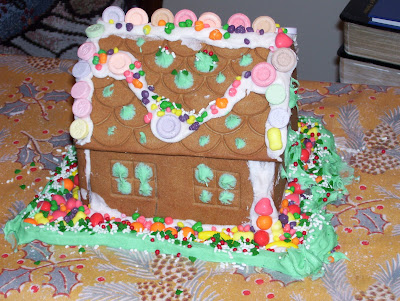 There are many things going on each day, we need to stop and take time to build a gingerbread house. This was a day we spent with our 5 year old niece. It took a long time to build. We had to put some candy on the house and we had to eat some. Put some more on and eat some more. One piece at a time. It takes time to build a house. But most of the time we are so busy with our daily activities that our house does not look as pretty as this one. Take the time out this holiday session to say a kind word, to take a meal to someone in need, and to really see that life is what you make it. God wants us to be his hands and his servants, going about doing good. But we go right past the people who really need us. Take time today to build your own gingerbread house.
Posted by Angie Paxton at 8:57 AM No comments:

Heb. 10:16-17 This is the agreement (testament, covenant) that I will set up and conclude with them after those days, says the Lord: I will imprint My laws upon their hearts, and I will inscribe them on their minds (on their inmost thoughts and understanding),
17 He then goes on to say, And their sins and their lawbreaking I will remember no more.

Gen. 9:15-16 I will [earnestly] remember My covenant or solemn pledge which is between Me and you and every living creature of all flesh; and the waters will no more become a flood to destroy and make all flesh corrupt.
16 When the bow [rainbow] is in the clouds and I look upon it, I will [earnestly] remember the everlasting covenant or pledge between God and every living creature of all flesh that is upon the earth.

Ge. 50:21 Now therefore, do not be afraid. I will provide for and support you and your little ones. And he comforted them [imparting cheer, hope, strength] and spoke to their hearts [kindly].

Ex. 15:26 Saying, If you will diligently hearken to the voice of the Lord your God and will do what is right in His sight, and will listen to and obey His commandments and keep all His statutes, I will put none of the diseases upon you which I brought upon the Egyptians, for I am the Lord Who heals you.

Jer. 31:33-34 But this is the covenant which I will make with the house of Israel: After those days, says the Lord, I will put My law within them, and on their hearts will I write it; and I will be their God, and they will be My people.
34 And they will no more teach each man his neighbor and each man his brother, saying, Know the Lord, for they will all know Me [recognize, understand, and be acquainted with Me], from the least of them to the greatest, says the Lord. For I will forgive their iniquity, and I will [seriously] remember their sin no more.

Ez. 32:11-26 For thus says the Lord God: Behold, I, I Myself, will search for My sheep and will seek them out.
12 As a shepherd seeks out his sheep in the day that he is among his flock that are scattered, so will I seek out My sheep; and I will rescue them out of all places where they have been scattered in the day of clouds and thick darkness.
13 And I will bring them out from the peoples and gather them from the countries and will bring them to their own land; and I will feed them upon the mountains of Israel, by the watercourses, and in all the inhabited places of the country.
14I will feed them with good pasture, and upon the high mountains of Israel shall their fold be; there shall they lie down in a good fold, and in a fat pasture shall they feed upon the mountains of Israel.
15I will feed My sheep and I will cause them to lie down, says the Lord God.
16I will seek that which was lost and bring back that which has strayed, and I will bandage the hurt and the crippled and will strengthen the weak and the sick, but I will destroy the fat and the strong [who have become hardhearted and perverse]; I will feed them with judgment and punishment.

Rev. 2:7 He who is able to hear, let him listen to and give heed to what the Spirit says to the assemblies (churches). To him who overcomes (is victorious), I will grant to eat [of the fruit] of the tree of life, which is in the paradise of God.

Rev. 2:10 Fear nothing that you are about to suffer. [Dismiss your dread and your fears!] Behold, the devil is indeed about to throw some of you into prison, that you may be tested and proved and critically appraised, and for ten days you will have affliction. Be loyally faithful unto death [even if you must die for it], and I will give you the crown of life.

Rev. 2:17 He who is able to hear, let him listen to and heed what the Spirit says to the assemblies (churches). To him who overcomes (conquers), I will give to eat of the manna that is hidden, and I will give him a white stone with a new name engraved on the stone, which no one knows or understands except he who receives it.

Rev. 3:10 Because you have guarded and kept My word of patient endurance [have held fast the [b]lesson of My patience with the [c]expectant endurance that I give you], I also will keep you [safe] from the hour of trial (testing) which is coming on the whole world to try those who dwell upon the earth.

Rev. 21:7 He who is victorious shall inherit all these things, and I will be God to him and he shall be My son.

Det. 31:8 It is the Lord Who goes before you; He will [march] with you; He will not fail you or let you go or forsake you; [let there be no cowardice or flinching, but] fear not, neither become broken [in spirit--depressed, dismayed, and unnerved with alarm].

1 Chr. 28:20 ...Be strong and courageous, and do it. Fear not, be not dismayed, for the Lord God, my God, is with you. He will not fail or forsake you until you have finished all the work for the service of the house of the Lord.
Posted by Angie Paxton at 6:52 AM No comments:

LISTEN TO THE MINISTRY PODCAST

Angie Paxton
Traverse City, Michigan, United States
My Husband & I are ordained with World Evangelism Fellowship and the Missionary Church International. Called by God to urge the church to return to the cross. I am also called to come along side my Husband, to be a help mate to him, in reaching the world for Christ.

Send your prayer request to us.
Also, ask us about Acts 26:18
Ministries teaching materials.

APRIL - CD OF THE MONTH

To everyone who will write to us this month we want to send you a free CD, "The Sin Nature".

Remember to watch the Len Paxton teaching series telecast on upnorth2 if you are in the Traverse City MI viewing area. Wednesday nights at 10 pm.